The Special Sauce of the Thousand Islands 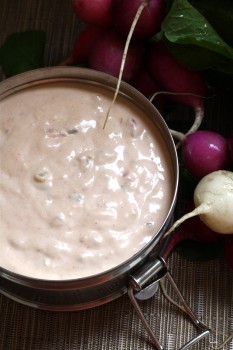 “Would you like Bleu cheese, French, Russian, Ranch, oil and vinegar, or Thousand Island dressing?” It was a familiar chant I’d hear from waiters and waitresses in restaurants high and low-end– wherever I’d go in the 1970’s.

Some might lament this time in our history as a sort of Dark Age of salads– iceberg lettuce, either crispy or wilted, anemic tomatoes, and a packet or two of saltines that never seemed to make it to their intended consumer fully intact– the thin, clear packaging holding fast to either your fingers or the side of your soda glass thanks to static electricity.

Others might have viewed this time in our country’s life as a sort of Golden Age for thick, creamy salad dressings– some much needed zing and oomph to perk up (or completely drown) the most flaccid of leafy green offerings.

I was strictly an oil and vinegar fellow. I shied away from the heavy stuff because I thought it would make me phlegmy. The Blue cheese dressing my mother preferred made me gag, the French looked like an aged whore with a terrible dye job, and the Russian seemed positively treasonous back then. The Ranch dressing, however, was appealing as it made me think of cowboys in tight jeans who smoked and drank and slept together in bunk houses when they weren’t busy soaping each other up in antique horse troughs. I approached that dressing carefully. I would order a little bit of it on the side. It was for my french fries in case anybody asked.

And what about Thousand Island dressing? It left me completely baffled. I tried to imagine palm trees and tropical fruit and people wearing very little in the way of clothing, but things just didn’t seem right.  The people were always naturally a few shades darker than myself, as if they’d been sunning themselves on some kind of never-ending summer vacation. They were happy and beautiful and exotic. But then they came up with this mayo-based, pickle-and- chili-sauce-infused dressing to represent themselves? It made no sense.

How on earth were you supposed pour Thousand Island dressing over a pineapple?

It just wasn’t tropical in my book. I mean, where were these people from? Which “thousand islands”? Were they Indonesian? Filipino? Bahamian? The French and the Russians would agree with me that Thousand Island dressing was culturally confused. And, since they were so busy entertaining each other, the ranch hands wouldn’t even give it the time of day.

And neither would I. I decided that Thousand Island dressing was just a bad marketing idea and dismissed it from my consciousness, never having gotten to the bottom of this Thousand Island mystery. To me, the Thousand Islanders were sort of like the lost civilization of Atlantis,  only creamier.

Occasionally, the dressing would creep into my consciousness. I’d wonder what made the special sauce on my burger so special. A diner would use Thousand Island dressing to pinch hit for the Russian dressing in my Reuben, but it never ever made it onto my salad plate.

Until now, that is. I’ve given it another chance. My fear of phlegm has cleared up, if you will.

And it’s also due to the fact that I now understand where Thousand Island dressing is coming from. There is nothing tropical about it. Its success can be traced to a thrifty 19th Century New York housewife, a famous stage actress accused of getting a little too hot and heavy with her co-star, and a hotel magnate whose most famous hotel gave its name to another salad.

The thousand islands in question are those that exist in the middle of the St. Lawrence river between Ontario, Canada and Upstate New York. In the late 19th Century, these islands existed chiefly for the benefit of the leisured classes.

One family who made its living off of these monied folk was the family La Londe of Clayton, New York. George La Londe, Jr. was a local guide who would take people who could afford to take time of off work around the river, showing them the best places to fish for pike or black bass or build a mansion or a dock for their yacht. On mild evenings, he would treat them to “shore dinners” wherein he would serve his wife Sophia’s special dressing.

At one such dinner, a New York stage actress named May Irwin was so impressed with the dressing that she requested the recipe. It was she who gave the name “Thousand Island” to the dressing. Around the same time, she gave what is believed to be the world’s first on-screen kiss for Thomas Edison. Whether or not her breath smelled of Thousand Island dressing is unclear. Sadly her food journal  (in the 19th century, food blogs were handwritten and not kept online or backed up with Time Machine or Back Blaze) was destroyed in a fire.

Not long after giving Miss Irwin the recipe, Mrs. La Londe gave it to a Mrs. Bertrand, who served the dressing at her hotel where it was tasted by one George Boldt, owner of a local island mansion and, more importantly, the Waldorf Astoria hotel, where he insisted this delightful salad dressing be served.  Clearly, Mr. Boldt loved his mayonnaise-based salad dressings. Thousand Island dressing was a sensation.

Or, at least, it caught on. I’d prefer not to be accused of sensationalism.

Combine everything but the Tabasco sauce in a medium sized bowl. Mix well. Add Tabasco to taste.

This entry was posted in Uncategorized. Bookmark the permalink.

2 Responses to The Special Sauce of the Thousand Islands