A Quesadilla to Make You Cry

Posted on February 6, 2010 by Michael Procopio

A couple of weeks ago, I was asked to fill out a questionnaire about food and my relationship to it. What did I think about the latest food trends? Why is food important? Do I consider myself a “foodie”? (Answer: Eww, no.)

For the most part, the questions were easy for me to answer, save one:

“What is the best meal you’ve ever had (or made) and why?”

I had to walk away from the computer for a little while after I read that. The best meal ever? Ev-er? How the hell am I supposed to choose one meal out of the 43,000 or so meals I’ve eaten in my lifetime?  There isn’t one best meal. There are several.

I’ve already written about some of them: dining in a rain-soaked Paris with the most charming man on the planet; eating al fresco in a rose-scented garden with good friends; brunching and game-playing on a Sunday afternoon on the Isle of Alameda. Choosing a favorite among them would be like having to single out your favorite child. And there are so many others.

As I was struggling to single out one to discuss, I suddenly thought of one of the simplest meals I’ve ever eaten and one taken mostly in solitude– a quesadilla that made me cry.

I had been out the night before with the most handsome man I’d ever laid eyes upon and who, conveniently, doubled as my boyfriend. He was an actor who made his monthly rent by bartending at a swank restaurant by night and posing for greeting cards by day when he wasn’t busy playing sailors with one line to speak on Murphy Brown and other, popular television shows of the day. He was old. Thirty. And charming. Very. What on earth he was doing with a twenty-two year-old with a flair for the dramatic was beyond me. Maybe it was an actor thing. Drama is as drama does.

Apparently, his being with me was rather beyond him as well, because that evening, after the depressing, excruciatingly unwatchable Derek Jarman film we’d just seen, he said the magic words that every love-struck person loves to hear:

“I’m sorry, but this just isn’t really working for me. I think you’re a nice guy and all…” And so on.

It was an early night.

I returned home to find my roommate Craig sitting on the couch in our living room, watching television. I withered into the cushion next to him. He didn’t have to ask what was wrong, because he knew I was going to tell him everything. So he just poured me a drink and let me do it. I shall spare you the details.

The next morning, I awoke to a timid knock on my bedroom door. “Mike? You up?” Craig opened the door with his free hand. In the other was a tray. The guy had made me breakfast in bed. I sat up in my bed and took the tray from him. “I thought this might make you feel a bit better,” he said.

No one had ever made me breakfast in bed.

On the tray were a cup of tea, a little glass of orange juice, and a quesadilla. A quesadilla for breakfast? Now that I think of it, that’s a rather odd choice for breakfast, but the man’s from San Diego, so there you have it. He sat on the edge of the bed for a minute or two and chatted with me, then suddenly sat up and told me that I should eat because my breakfast was getting cold. With that, he left the room.

I sat there staring into my quesadilla for a moment and thought how sweet it was of my best friend to make me breakfast like that. Why couldn’t my boyfriend do things like that for me? And then, of course, I remembered that I no longer had a boyfriend. Depressed, I tucked into the quesadilla.

It was still warm and creamy on the tongue. He’d used the cambozola cheese we’d bought. We were coming out of our “brie-is-fancy” stage of cheese awareness and were now branching out into the bleu-veined ones.

But there was something else tucked into that crispy tortilla which made my tongue heat up. A lot. He threw in peppers. Scotch Bonnet peppers. Craig and his girlfriend Shannon had just started dating and were trying to out-macho each other on the Scoville scale. As an occasional participant in their bizarre, heat-related courtship ritual, I considered myself a wimp when it came to such things, but I continued to eat. My eyes burned, my nose began to run. After a couple of bites, I was in discomfort; after a couple more, I was in pain.

The gulping of hot tea did nothing to help. The swishing of orange juice around my gums only seemed to spread the heat everywhere. I had never eaten anything so hot in my life. It was horrible, yet oddly delicious. And then something unexpected happened.

I cried. I sat there in bed, balancing the tray of food on my knees and cried, which was something rather foreign and forbidden to young men. I hadn’t allowed myself to do it in years. The heat from those damned peppers so filled my eyes with tears that there was nothing else I could do, so I just went with it.

I wept and sobbed and moaned as quietly as possible, but it went on and on. And on. Had I been standing, I would have lost my balance and fallen into a heap. It was uncontrollable. I felt inconsolable. All the disappointment and hurt I’d been storing inside me for years just poured out of me and onto my t-shirt and the breakfast tray. I can’t remember how long I went on like that. I was grateful that Craig was thorough enough to provide a napkin.

“Well, that was weird,” I thought. I was puffy and tear-stained and my tongue was still a but numb, but I felt incredibly, wonderfully light.

What was so awful? So I got dumped. I was disappointed, but I had to admit that the fellow who did the dumping did so honestly and with concern. He was (and I am sure still is) a thoroughly decent fellow. Rather than concentrate on a man I didn’t have anymore, I thought about one that I lived with, thanks to some quirk of fate and good timing, for the past four years and realized just how lucky I was. I got out of bed, wandered into the kitchen, and thanked him. I should have given him a big bear hug and told him that, despite the pain of that meal, I’d never felt better after eating anything in my life. I should have told him that I loved him, but I was twenty-two and felt weird about telling anyone I loved them.

Fortunately, a lot has changed since then. I can handle heat, I can cry unaided by painful food stuffs, I can tell the people who are important in my life that I love them.

And then there are some things that haven’t changed. Craig’s still there after twenty years. When I begin to mope and whine about all the things I don’t have in my life, I check myself by thinking about all the great things I do. And Craig, his wife Shannon, and their wonderful/crazy children are always at the top of that list. So, since I’m here and all, I might as well say it.

Thanks for always being there, Craig. I love you, man. 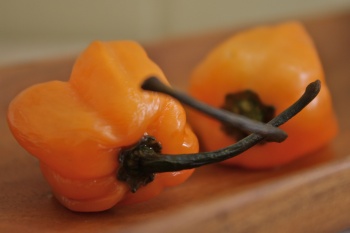 Fortunately, I’ve grown to the point where I no longer need the help of chile peppers to make me cry. I can do that on my own, thank you very much. As a result, I am sparing with their use. If you still need such aid, I would suggest going overboard with them. It’s your quesadilla, you can cry if you want to.

I’ve substituted habañero chiles for Scotch Bonnets in this recipe because they are easily available and hover in the same heat category (100,000 to 350,000) on the Scoville scale.

Quesadillas are incredibly versatile– you can put just about anything in them, so long as the ingredients won’t crack a tooth. I mean, Craig did.  Add whatever you like.

Cambozola cheese (rinds removed or not– your choice), sliced into thin wedges.

Olive oil or butter for cooking

1. Heat a heavy-bottomed skillet, preferable cast iron (or, if you have one, a comal) with about a half-dollar-sized amount of butter or olive oil. Add tortilla and cook gently until little air pockets form.

2. Arrange cheese on one half of the tortilla. Sprinkle as much chopped chile as you dare, keeping the heat on low. Fold the empty side of the tortilla onto the one covered in cheese and chiles.

3. Wash hands thoroughly with soap and water. When living with Craig, I used a cutting board that had just been used to chop habañeros. Neither of us washed our hands, but merely rinsed them off quickly. I made the mistake of touching my eye. Craig made the greater mistake of going to the bathroom. We both retired to our respective bedrooms and writhed in pain in privacy.

4. Return to the quesadilla, increasing the heat slightly. Flip it every twenty seconds or so until both sides are browned and crisp and the insides melted.

5. Remove quesadilla from the skillet and cut into wedges. Serve with sour cream or Mexican crema, or whatever you like. Or just slide it onto a plate, crawl into bed, and prepare yourself for a good, long weep.

13 Responses to A Quesadilla to Make You Cry