Posted on September 5, 2009 by Michael Procopio 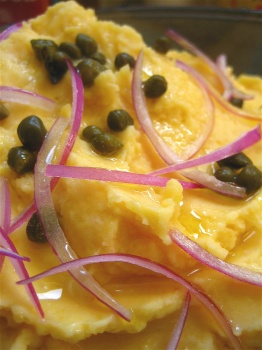 I don’t care what you say, this is not hummus. It is called favosalata. If you insist on calling it hummus, I will persist in telling you that you are wrong, however politely.

Where I work, we are very good at pretending the customer is always right, even when he isn’t. I hear our guests make ordering blunders on a nightly basis, which isn’t surprising, considering the fact that our dinner menu is in Anglicized Greek. It’s downright confusing to the uninitiated. And, of course,  un-Greek.

As a server, I am more than happy to offer my descriptive and pronunciation skills to daunted diners. Sometimes, people simply ask me to say the word “kolokithokefthedes” because they find it fascinating that anyone could pronounce it at all, other times they might giggle over the  “soutzoukakia”. And then there are those guests who are left speechless when I tell them the right way to say “fakes” which, if interpreted as English, sounds more like an emphatic affirmation with an unprintable expletive than any other food I’ve encountered.

But I draw the line with people who order hummus. We don’t serve it. We never have served it. Yet people insist that we do. In fact, some people positively rave about our hummus.

On Yelp and on personal food blogs, I have found people talking about our incredible hummus platter. One more than one occasion, I have read people blogging the praises of our favosalata, but mistakenly refer to it as a feta dip. That would be tirosalata. It’s the green one, the one with the cheese in it.

Some of the time, I just let it slide. If you want to call our eggplant dip by its Arabic name “baba ganoush”, that’s fine. We might be speaking different languages, but we’re still talking about essentially the same thing. And I see no need to unnecessarily show up a guest with my (necessarily) superior knowledge of ingredients. But when I see one person at a table point to the pink spread and tell another, vegetarian person, “Oh, that’s the hummus, it’s my favorite dip!,” I have no choice but to step in and sort things out because that pink “hummus” is made with cod roe. And it’s called taramasalata.

So many salatas to choose from: tirosalata, melitzanosalata, taramasalata, favosalata, and the ever-present tag-along, tzatziki. No wonder we are required to give a little tour of the dip platters whenever we deliver them to our guests. Sometimes, I have to describe them three times to the same two people. I don’t mind really, it’s simply a part of what I do. And please notice that nowhere in this paragraph (except here) have I mentioned our delectable hummus. Why? BECAUSE WE DO NOT SERVE HUMMUS, that’s why.

I can understand the confusion. Both favosalata and hummus are made from legumes cooked with water and garlic. Both have olive oil and lemon juice. They are near neighbors on the yellowish end of the color spectrum. They do not, however, taste anything alike. Really. And, though hummus can be found in many a Greek restaurant, we choose not to serve it. I sometimes like to tell non-Greek people that hummus is a politically sensitive dish, that it makes some Greek people feel oppressed, since it is a recipe that has Ottoman Empire written all over it. Then again, the Greeks love their baklava and coffee, which were also introduced by the Turks, so there you have it.

Favosalata is itself confusing. The name of the dish would rightly lead one to think that this is a dish made from fresh or dried fava beans. In some cases, a favosalata can be exactly that– a beautiful, vibrant green purée of fresh favas, with olive oil, a hint of feta, and fresh mint. This particular dish, however, is made from yellow split peas. Ideally, yellow split peas from the island of Thira (aka Santorini), where it is somewhat of a specialty.

I cannot be abslolutely sure, but I am fairly certain that there are different recipes using different beans for this dish and that someone out there in the blogoshpere, more than likely Greek , is going to tell me that this isn’t the way they learned to make this dish. Well, gia sou, baby, bring it on. I’d love to hear about it. Seriously.

In the mean time, this is the hummus favosalata recipe I’m sticking to. Enjoy.

I sometimes call this my Friday-with-a-martini dip. Served slightly warm and liberally sprinkled with caper, onion, fresh lemon, and olive oil, it plays nicely with cold, cold gin. Scoop it up with pita, crackers, crusty bread, a spoon, your fingers, whatever.

Like a lot of things in cooking, this is a pretty elastic recipe. The measurement of ingredients is merely suggestive, not final. Want a your dip tangier? Add more lemon and vinegar. Saltier? Go for it. The key is the consistency of the peas. If you undercook them, the texture will be unpleasant, if you overcook them, you’ve got mush. If forced to choose between the two, I would err towards the mush-end of the spectrum.

Makes about 4 cups, which serves about one in my house.

The juice of three lemons

A liberal amount of salt, kosher or sea salt

1. In a medium-sized sauce pan or dutch oven (my preference), add split peas, water (and wine, if using), and a good dose of salt. Bring to a boil, then immediately reduce to a simmer until the peas are tender. I repeat: undercooking them will lead to an unappetizing texture; overcooking them will take you all the way to split pea soup, which certainly does not spell the end of the world, simply the end of this recipe. Cooking time: about 35 to 40 minutes.

2. When peas are done, remove from heat and gently strain into a cheesecloth-lined colander, removing as much of the liquid as possible. Place the peas (along with the garlic they were cooked with) into a food processor or blender while still warm. Add the grated onion, lemon juice, and vinegar. Blend while drizzling in the olive oil. Note: you are not emulsifying the oil with anything, it is merely adding texture and flavor. Stop when the desired texture is reached, which is somewhere in the vicinity of smooth mashed potatoes.

3. Place desired serving amount in desired serving vessel, sprinkle with capers and sliced red onion, drizzle with olive oil and a squeeze of fresh lemon juice, and serve warm to those whom you desire to serve.