Hungry Girl: How to Cook with Non-Dairy Creamer 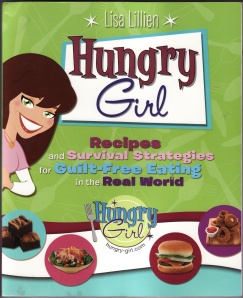 Several weeks ago, Amy Sherman gave me a cookbook entitled Hungry Girl: Recipes and Survival Strategies for Guilt-Free Eating in the Real World, because she knew it would drive me crazy.

How well she knows me.

I browsed through the pink-tinged pages looking at the recipes, fighting my way through the over-enthusiastic use of exclamation marks and cute-and-confusing titles like “pizzalicious chop chop” (page 44) and “amazing ate-layer dip” (page 158). Intending to be “sassy” and “fun”, the writing comes across as though it were the product of a calorie-obsessed teen-aged girl rather than an adult woman.

The author, Lisa Lillien, is “a self-appointed ‘foodoligist’ (sic)” and founder of the website HungryGirl.com— a popular website with more than 100,000 500,000 subscribers. According to her website, she rightly states that she is neither a dietitian nor a food professional, but “an average female, struggling with the same food issues most females struggle with every day.” Losing and gaining the same 10-15 pounds several times over, and trying “every diet under the sun,” she has a self-admitted food obsession– counting calories and finding low-fat, low-carbohydrate substitutes for a wide variety of foods.

The book, which is a natural extension of her popular website, is sadly rife with rather unnatural foods. For example, her “2-good twice-baked potato” (page 124, from”Manly Meals” Chapter 6) calls for fat-free American cheese and fat-free liquid non-dairy creamer. Is substituting the fats found in natural dairy products with things like corn syrup solids and Polysorbate 60 (both found in non-dairy creamer) such an excellent idea, however many calories might be saved? Polysorbate 60, as I have learned from a rather amusing article posted at Wired magazine, is:

…made by polymerizing ethylene oxide (a precursor to antifreeze) with a sugar alcohol derivative. The result can be a detergent, an emulsifier, or, in the case of polysorbate 60, a major ingredient in some sexual lubricants.

Perhaps the dish should be re-christened “2-good twice-lubed potato.” (And hint to the recipe testers– you might want to sprinkle the potato with paprika and parsley after removing it from the oven.) 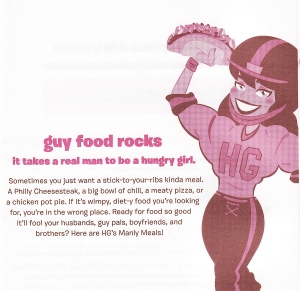 In Chapter 12, or, “Happy Hour”, Lillien states up front that it’s no secret that alcohol has “lots of calories”, and guides her readers towards lower-calorie choices if one must drink, but her drink recipes fumble. The “kickin’ cranberry cosmo” (page 249), for example:

By omitting the Cointreau or triple sec for the sake of approximately 20 calories, Lillien has turned the Cosmopolitan into a Cape Cod. I should think any author as attached to the color pink as Miss Lillien is would know the difference.

And dessert? How about the “ginormous creamy frozen caramel crunchcake” (page 227)? Cover the top half of one caramel-flavored rice cake with Cool Whip Free. Gently place another rice cake on top, making a sandwich. Freeze for at least 1 hour, then enjoy. There’s that Polysorbate 60 again. And high-fructose corn syrup? Yup. A diet high in fructose makes lab rats fatter than those placed on other diets. Read that Wired article again— it’s all about Cool Whip. Oh, it’s also been pointed out that the Sorbitan Monostearate, which is also found in this fat-free topping is sometimes used as hemorrhoid cream.

This book isn’t all bad. In fact, it contains some excellent, sensible advice for those of us out there battling with our own weight issues. For example, Lillien suggests ways of staying active at work, how to avoid mindless snacking, and is vigilant about listing the per-serving calories, fat, sodium, fiber, carbs, sugars, and proteins in all of her recipes.

And not all of the recipes are creepy, just most of the names. For example, the “v10 soup” is completely devoid of atomic-age substitutes and comes with a warning that it is “jam-packed with an INSANE amount of veggies!!!”

Perhaps I’ve got it all wrong. Maybe living as I do in the heart of the Bay Area has spoiled me to the point of not recognizing what the “real world” might be, in terms of day-to-day eating. I’m not an on-the-go girl trying to fit into cute, size 2 pants. Nope, I’m a nearly-40 year-old man. But, as a gay man, the tyranny of body consciousness and fitness is not unknown to me.

In a country which is growing fatter by the year, it’s a shame that the author, who has such a large following, should choose to lead her readers down the path of empty calories and diet tricks. In an effort to help people avoid the “real world” dangers of fast food and junk food, Miss Lillien merely offers pale substitutes of the originals. In obsessing over calorie and fat content, she offers little in the way of whole foods–relying heavily upon heavily processed, store-bought items instead– many of which are thought to contribute to weight-gain in the first place, like high-fructose corn syrup.

Is Hungry Girl’s cookbook “guilt-free” as advertised? Hardly. This book, however well-intentioned, offers little in the way of substance. If anything, it’s guilty of promoting the same unhealthy food obsessions that drove Miss Lillien to create her popular website in the first place.

Now, if you will please excuse me, I’ve got a big bowl of Fiber One® drowning in some delicious non-dairy creamer to consume.

This entry was posted in Uncategorized and tagged cookbook, hungry girl, review. Bookmark the permalink.

6 Responses to Hungry Girl: How to Cook with Non-Dairy Creamer