Smoothies– they’re everywhere. For some reason, that troubles me.

I have nothing against the style of drink itself. I think smoothies are an excellent source of nutrition for the ill, the lazy, and people just too on-the-go to be troubled by such time-wasting activities as chewing. They are simple to ingest, simpler to digest.

I am troubled primarily by the name. Smoothie. On the one hand, it’s self-consciously cute, which is terribly annoying in and of itself. On the more upsetting hand, however, rests the fact that I can’t now help but think, thanks to too much time spent Googling, about an alternative meaning of the word. In nudist terminology, a “Smoothie” is a person who prefers a clean-shaven look. Especially in the nether regions. Further research caused me to examine a photograph of a very happy-looking sixty-something nudist couple whose age-appropriate faces and bodies starkly contrasted their pre-pubescent-looking genitalia. I won’t comment further on the photo, but the thought of these two stopping by my place for a nutritious blended fruit beverage caused me great stress– I was uncertain if I had enough clean towels to put down over the sofa.

Where on earth did these smoothies come from? The beverages, not the nudists– though that does lead one to wonder about who can claim first use of the name. According to Wisegeek.com, the proto-smoothie is the Orange Julius, which first appeared in the 1920s– decades before the franchise would find its true niche in the yet-to-be-built malls of America.

The modern smoothie is said to have been created by a drugstore employee named Steve Kuhnau who, thanks to his own lactose-intolerance, wished to create a milkshake alternative that was both healthy and delicious. He later created the Smoothie King. Now you know who to thank. Or blame.

I was prompted to wonder about smoothies recently by a friend who finds them rather appealing. In the middle of one of our outings, he wanted to stop by the market and pick up a bottle of flaxseed oil. For his smoothies, he explained. I later found out that he does not yet own a blender, so he uses baby food to get that thick, “smoothie” consistency. Baby food– which I assume he purchases. For someone who is known to make his own lip balm from scratch, I was unsurprised by his ingenuity, but the thought of him eating baby food struck me as rather comic, if a tad unsettling, because he is neither lazy nor is he lacking any of his adult teeth.

So, with the best of intentions, I’ve both bought him a blender (photo, top of page) and included a delicious flax-infused recipe to go with it. Enjoy, though I cannot bring myself to call it a, well, you know.

the juice of one orange

Place all ingredients into blender. Press the “smoothie” button after ensuring the blender lid is firmly in place and the appliance is plugged into a nearby wall socket. Blend until smooth, of course.

Garnish with a sprinkling of whey powder, if you want to use up as much of your $14.99 container as possible, and flaxseeds. Serve with Peanut Butter Muscle Bombs (watch this space for recipe). 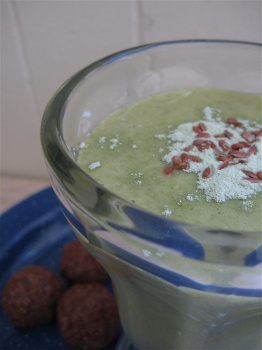 Notes: The green hue of the drink is derived from the vanilla whey powder. Since green= health in smoothie circles, it is to be desired.

This entry was posted in Uncategorized and tagged beverage, smoothie, waring. Bookmark the permalink.

2 Responses to Smoothie: Love the drink, hate the name.